In Alaska, disputes regarding contracts occur when parties to an agreement disagree on the terms and conditions. Property disputes, on the other hand, has to do with real estate conflicts. Generally, these contractual and property disputes occur between companies, property owners, individuals, and the government. Contractual disputes may give rise to a claim for breach of contract, and such claims may be filed with either the Alaska Magistrate court or District courts. However, the Alaska small claims court caters exclusively to breach of contract and property damage issues. Disputes arise daily through-out all the industries. These often occur based on the following:

When any of these happen, the business relationship usually deteriorates.

· The name of the person involved in the record, unless said person is a juvenile

· The location or assumed location of the record or person involved. This includes information such as the city, county, or state that person resides in or was accused in.

What are Contract Disputes in Alaska?

Contracts are legal documents agreed-to by two or more entities, clearly stating the expectations and requirements of all concerned parties in a transaction. Hence, a contractual dispute is when any of the parties disregard the agreement, and the other party seeks damages. Although most contracts are written, some are verbal, while others exist solely by the involved persons’ actions. In certain instances, disputes may occur due to varying interpretations of a clause in the agreement. The following are the types of contracts in Alaska:

What are the Most Common Contract Disputes in Alaska

The following are the common contractual disputes in the state of Alaska:

What is Alaska Contract Law?

The Alaska contract law is the code governing the formation and legal enforceability of a contract in the state. The law also instructs on obligations embedded in the agreement (oral, written, or implied) among the concerned parties. Due to the uniform commercial code’s adoption, contract law regarding commercial goods transactions has become the standard. Generally, for a contract to be legal, the following elements should be present:

What is a Breach of Contract in Alaska?

A breach of contract in Alaska arises when a party fails to fulfill any contract promise without a legal excuse. The wronged person has the privilege to file an action with the courts against the party that breached the agreement. Lawsuits regarding a breach of contract are filed with the local small claims courts in the state.

What are the Remedies for a Breach of Contract in Alaska?

Generally, contract disputes are settled with legal or equitable remedies. The legal remedies usually come as financial compensation, while with the latter, the concerned parties take steps to correct the matter. In an Alaska breach of contract, the damages, otherwise known as remedies available to complainants, will depend on the contract terms. However, the following are the remedies given to a plaintiff who successfully files for breach of contract:

What Defenses Can Be Used Against a Breach of Contract Claim in Alaska?

What are Property Disputes in Alaska?

Alaska property disputes are instances when legal disagreements among property-owners arise concerning real estate and their assets. The properties involved in this conflict may be a pond, driveway, condominiums, deck, or a vacant lot. The dispute usually ensues between property-owners & neighbors, family relatives, trespassers, landlords, tenants, real estate developers & builders, or even the government. The Alaska property laws provide directives for the state’s residents when it comes to resolving these disputes.

What Are Some Common Types of Property Disputes in Alaska?

Below is a list of some common property disputes in Alaska:

How to Find Property lines in Alaska

Otherwise known as boundary lines, property lines are specific points that pinpoint one person’s property begins and ends as well as that of the neighbor. These lines aim to determine the length and size of different properties in an area and safeguard against boundary line disputes in the state. Also, it helps shape the owner’s decisions as to where to position certain items and structures, i.e., fences. Residents in the state can find their property’s boundary line through:

How do I Find a Property Dispute Lawyer Near me? 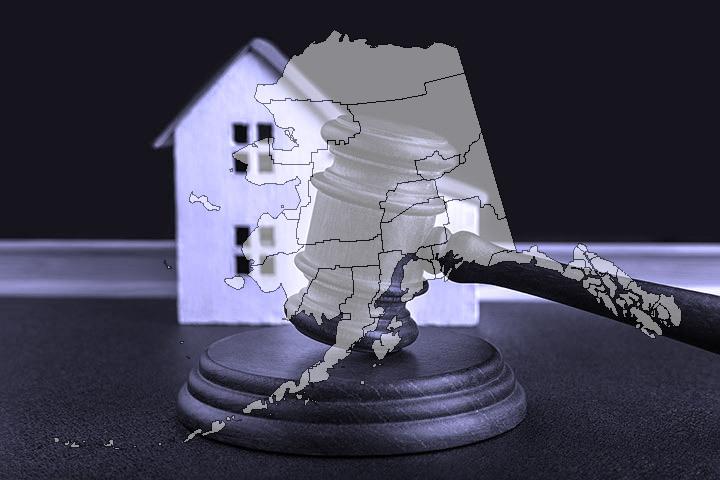